Get Our Best Quote 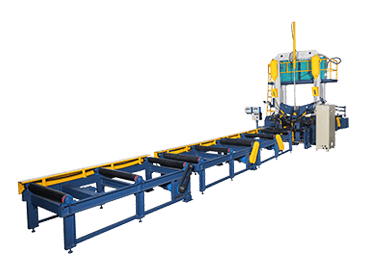 This type of the H beam assembly machine’s applied web height is 200-1500 mm. 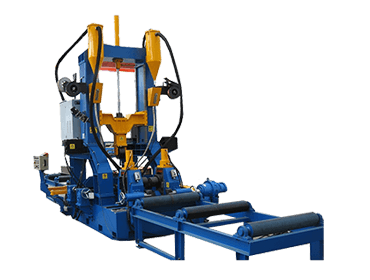 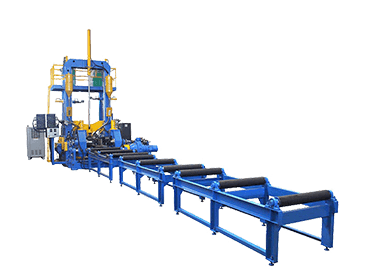 This size of the H beam assembly machine’s applied web height is 200-2000 mm.

SENLISWELD offers a great partnership and a great product like the H beam assembly machine. We are enriched with a different type of experience to become a reliable and well-established manufacturing company. 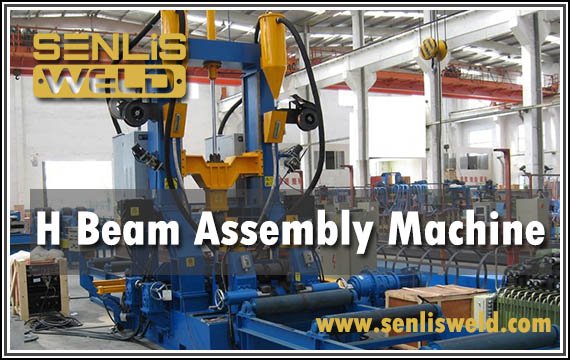 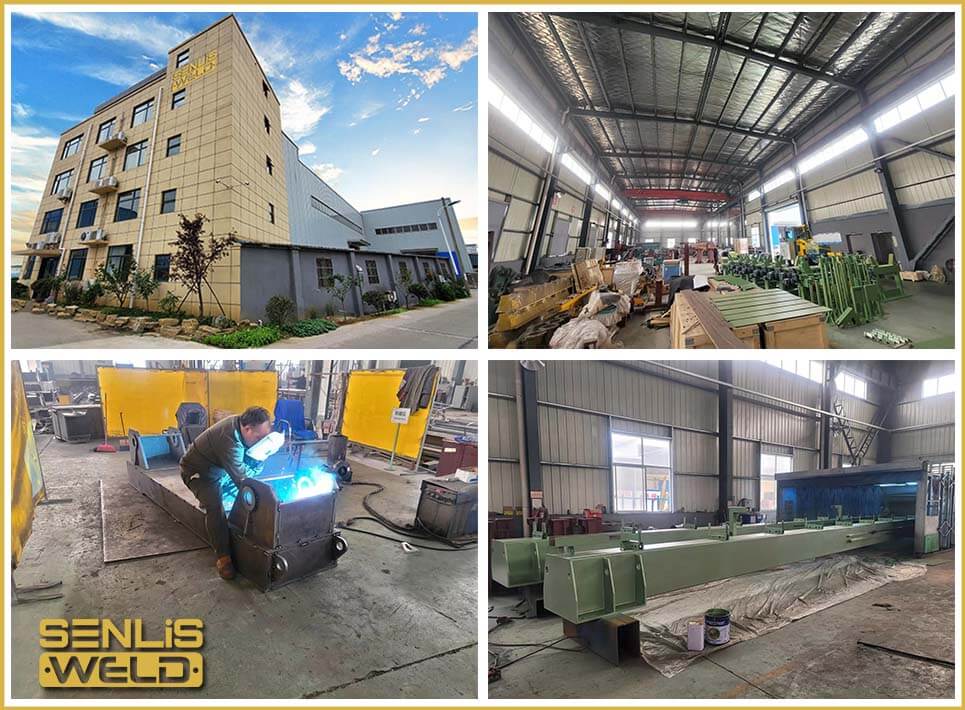 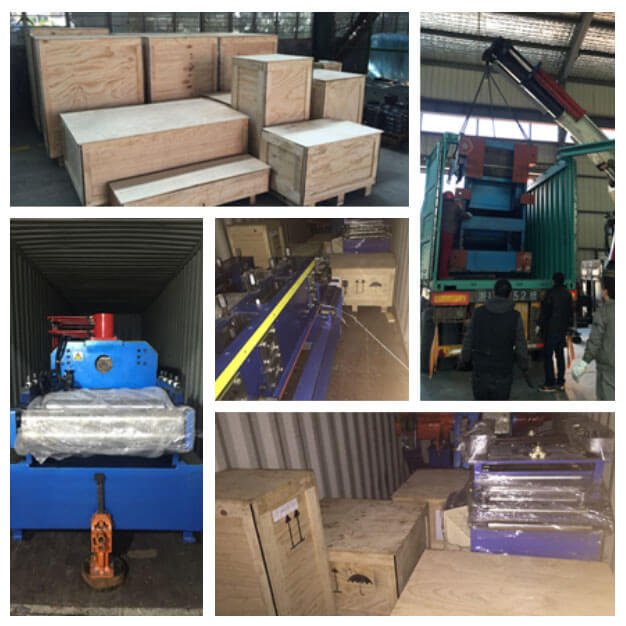 Related Welding Machines For Your Business

The H beam is one of the most fundamental members in the field of structural steel construction. So, it is crucial to maintain different critical factors in the production line of H Beam. You can assemble the H beam with assembly machines to efficiently perform these vital tasks.

Go through this FAQ guide to answer all your basic queries regarding the H beam assembly machine.

What Is The H Beam Assembly Machine?

The H beam assembly machine is used to assemble the components of the structural H beam before joining them.

The H-shaped beam has three main components. First, using the beam assembly machine, you can position them accurately before joining. Second, once the positioning is complete, you can hold the workpieces with a rigid clamping force. 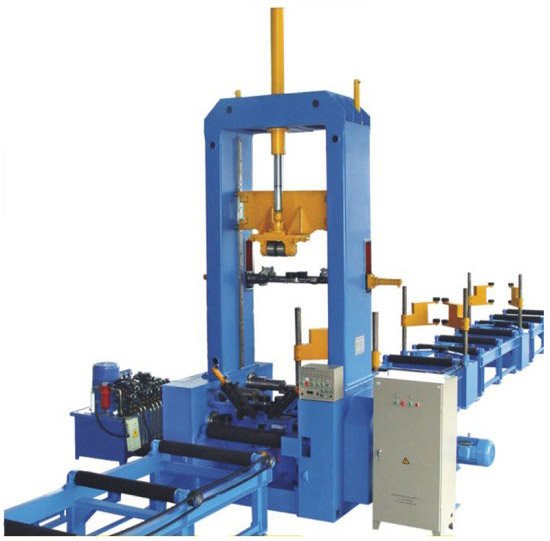 What Is An H Beam?

The H beam is a structural component widely used in the field of steel construction. The cross-section of the structure is similar to the shape of the English letter ‘H’. So, the beam is termed an H-beam. 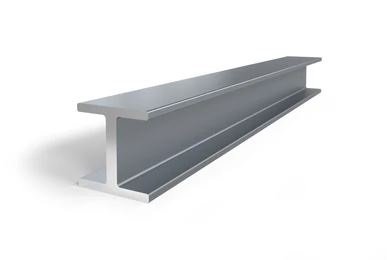 Apart from these, there are so many applications of the H beam in different kinds of fields like railway track, construction of large trailers, platforms, bridges, ship and dock building, truss members, support framework, etc.

Another important term, as you may often hear, is the ‘W Beam.’ The W beam and the H beam are identical. The W of the term comes from ‘Wide’ since the flanges of the beam are wider and called a Wide-flange beam.

Do I Need To Use An Overhead Crane To Handle The Materials Before Placing Them On The Assembly Machine?

Yes, you need an overhead crane to handle your workpieces before placing them on the H beam assembly machine. 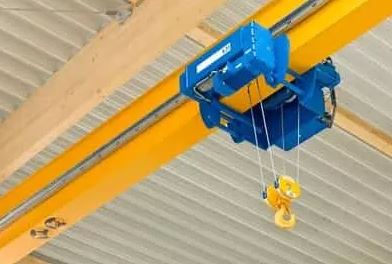 Since the structural components of the H beam are extensively heavy, so it’s better that you use an overhead crane to handle these components with safety and efficiency. Using the overhead crane, first, you have to place the bottom flange of the H piece in a horizontal positional on the platform.

You have to place them as described in three individual steps to efficiently hand over the assembling part on the assembly machine.

How Do I Operate With The H Beam Assembly Machine?

Operating the H beam welding machine is very simple, but you have to follow the steps sequentially to manage an efficient production line of H beams.

There are five main components of the H beam assembly machine that will handle your workpieces to make them ready for the welding operation. These principal components are the main machine, a centering trolley system, an input feeder roller, an output extraction roller, and a control system.

There might be differences in operating the assembly machines made by different manufacturers, but the general procedures will follow similar steps with minor changes.

What Kinds Of H Beams Can I assemble Using The H Beam Assembly Machine?

For assembling this type of workpiece with the assembly machine, assemble and weld the web section with one flange section. After completion, rotate the workpiece and join the other flange section in a similar pattern.

For assembling this type of workpiece using the H beam assembly machine, follow the same procedure as with the symmetrical H beam, but continue with the shorter flange at the second step. 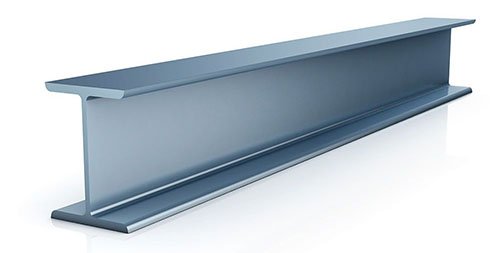 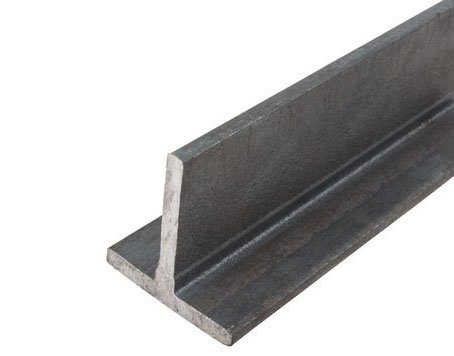 To assemble this type of unit, you have to manually change the setting through the control panel in the main assembly machine. Then, the machine will shift the position of the web section by the vertical wheels on the base wall to join them.

How Can I Assemble An I Beam Using The H Beam Assembly Machine?

Yes, you can use the same H beam assembly machine to assemble both the H beam and I beam. The assembling procedure for the H beam and the I beam is similar, but the component selection is different. 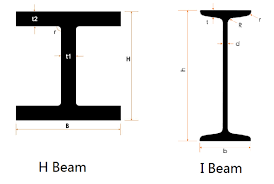 So, before jumping on assembling, you must first understand the differences between their structural components to easily identify the differences in their assembly procedure.

The next procedures are the same as you handle the H beam, and you can rely on the assembly machine to handle the rest.

How Does The H Beam Assembly Machine Benefit Over The Traditional Method Of H Beam Production?

The advancement in machines has vastly changed how you can view the production line of H beams in the modern manufacturing world. Here are some key comparison facts analyzed for you to justify how the H beam assembly machine can help you over the traditional systems.

With the H beam assembly machine, the overhead crane is used only to place the workpieces on the feeder roller. The machine handles the rest to roll forward, which greatly saves your time.

With the H beam assembly machine, you can keep the welding machine fixed in position and roll the workpieces forward and backward, which is more practical and economical than before.

But with the h beam assembly machine, the complete workpiece goes through a single center wheel, for why it maintains a perfect alignment throughout the longitudinal direction.

Can I Assemble The Beam With Both A Thin And Thick Cross-sectional Flange And Web Using The Same Assembly Machine?

If you use the h beam assembly machine, you can notice that the web section is handled by the vertical wheelsets coming from the two sides of the main machine. The wheelsets are attached to the wall of the base.

There is a gap between the wheels coming from the opposite directions that fit with the thickness of the web section. If you want to assemble a web piece with more or less thickness, you have to use the control system to adjust the two sets of wheels.

Shift them towards or away from each other to fit them until you have adjusted according to the thickness of the centering web section.

This is automatically adjusted according to the height of the web, combined with the thickness of the flange. So, you don’t have to manually adjust anything for working on thick or thin flange sections.

Most of the time, arc welding is utilized in welding and joining H beams. But due to some microlevel reactions, internal stress occurs in the newly welded sections, which is a common problem that welders face in the production line of H beams.

This scenario occurs due to the change in material characteristics of the filler and the base metals. The filler metal is a high-yield-strength metal that gets molten at the welding arc point. Simultaneously, the base metal also melts together to form a joint. 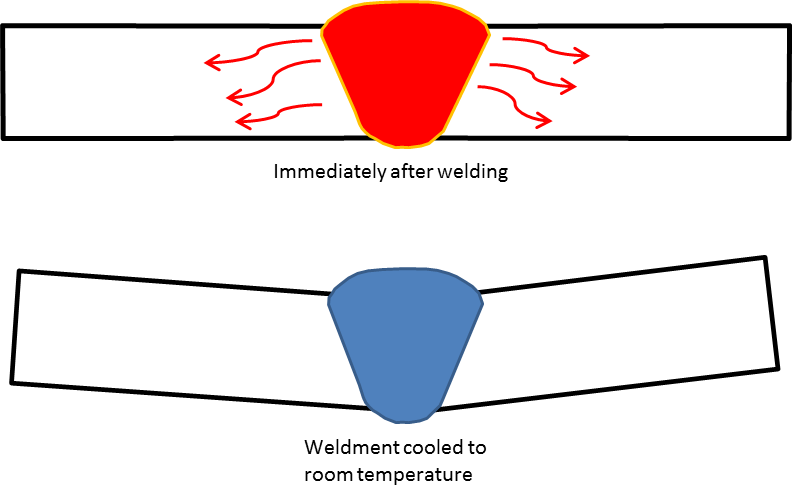 When both of these melt, they are expanded. But when they solidify, they quickly contact again. But bow, since the base metal is low-yield-strength compared to the filler material, they cannot contract at the same levels as the filler metal.

Due to the difference in materials compaction rate, internal stress is developed at the micro-level, which weakens the connection.

What Can I Do To Avoid The Internal Stress While Manufacturing The H Beam?

To solve the internal stress problem, you can either refine the welding procedure or control the temperature. Welders implement different practical steps to avoid internal stresses. You can follow these footsteps:

You can implement one or multiple steps to solve the internal stress problem, depending on the situation.

How Can I Automate The Manufacturing Process Using The H Beam Welding Machine?

You can automate the manufacturing process of the H beam by integrating the H beam assembly machine with other supporting components.

You can integrate the H beam welding machine with the assembly machine and the flange and web straightening workstation. You can control all these components through a central command system. 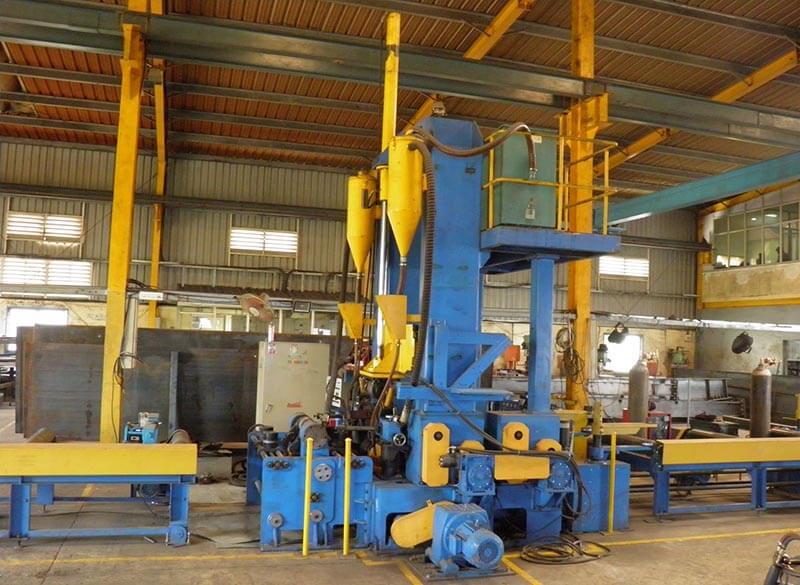 To achieve this complete automation, it’s better that you order together with all these components with a synchronized command system from the manufacturing company.

How Does The H Beam Assembly Machine Handle The Workpiece, Ensuring Its Safety?

The H beam assembly machine supports and guides the workpiece with the wheel system made from 40Cr alloy structure steel.

All the different wheel types, including the pressing wheel, web wheel, guide wheel, and main drive wheel, are manufactured from this material, which is excellent in pressure resistance and abrasion resistance. So, the safety of the workpiece is ensured. 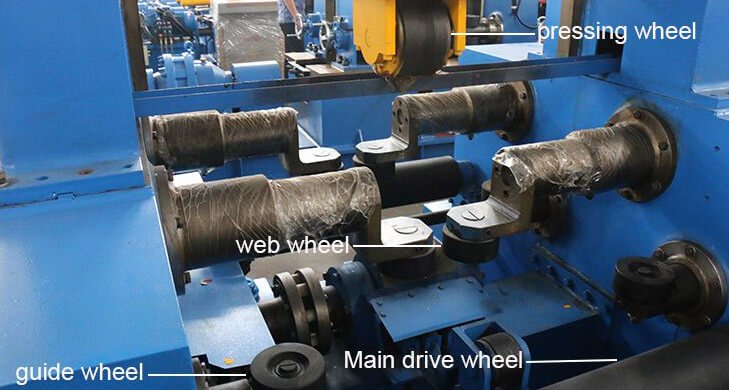 Can I Assemble The Beam With A Smaller To Larger Flange Width And Web Using The Same Assembly Machine?

Yes, you can assemble workpieces with variable width of flange and web section. The supporting and guiding wheels are not static, and you can move them forward and backward.

Using the control system, adjust the support and guiding wheels towards or away from each other to fit according to the width of the flange and web sections before starting assembly.

How Do I Select A Reliable Manufacturer Of The H Beam Welding Assembly Machine?

Always look for these characteristics in a manufacturer to ensure their reliability. A reliable manufacturer will always:

How Are The Web And Flange Pieces Perfectly Aligned With The H Beam Assembling Machine?

The web and the flange pieces are perfectly aligned using the web centering sensor and mechanism. The sensor detects the total width of the flange and calculates the midpoint where the web should be attached.

Next, the two vertical support rollers are controlled through central command to push and guide the web member from two sides. The guiding perfectly and accurately positions the web on the center to align with the flange sections. 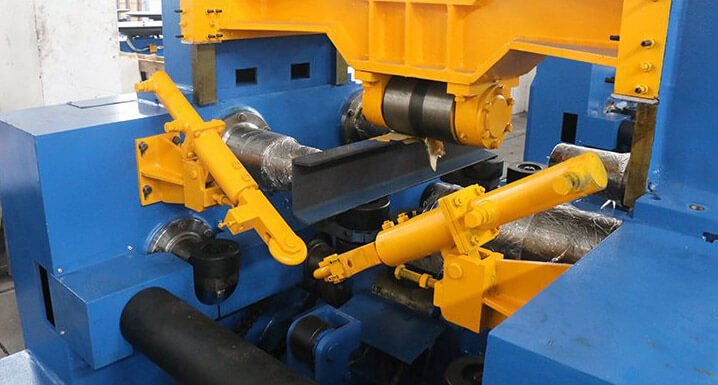 What Are The Additional Pieces Of Equipment Involved In The Production Of H Beam Together With The Assembly Machine?

The pieces of equipment involved in the production line of H beam are:

Do I Need To Straighten The Web And Flange Pieces Before Placing Them On The H Beam Assembly Machine?

Yes, it is crucial that you straighten the web and flange the beam members before placing them on the assembly machine.

If you don’t straighten them earlier, there will be the tendency of metal deformation even after welding is completed, which will give rise to internal stress.

So, use the flange straightener machine to first straighten the components before assembling them into final positions.

Can I Get An H Beam Assembly Machine With Multiple Working Zones?

Yes, the manufacturers can produce the H beam assembly machines with multiple working zones to speed up your production line at significant levels.

How does The Assembly Machine control the Input And Output Of The H Beam?

The other set of conveyor rolls are on the opposite side of the main machine, which you can control to bring out the workpieces.

Does The H Beam Assembly Machine Come With A Variable Speed Control Feature?

Yes, with the control system, you can easily set the variable speed according to the requirement of the welding procedure. This is especially useful when you are working with an automated welding process, and the speed is synchronized with the welding robot.

Get Our Best Quotation

Get a Quick Quote!